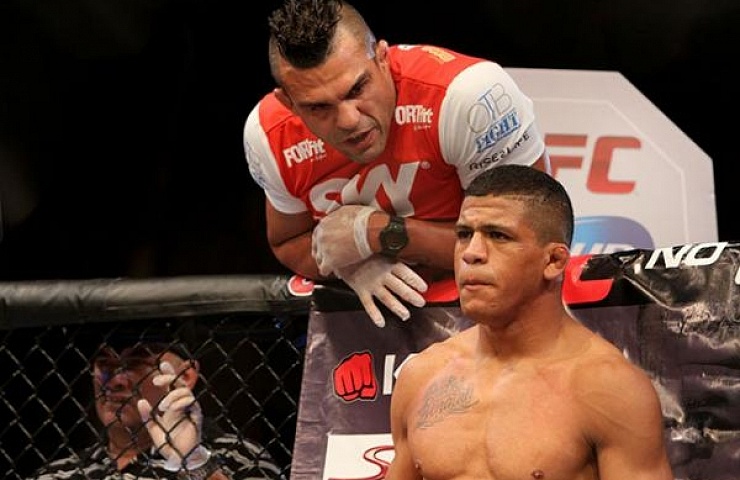 This is an English translation of an interview article I had with Tatame Magazine in Brazil. For the original article in Portuguese click HERE.

The UFC announced this week the duel between Vitor Belfort and Ronaldo Jacare for May 14, at an event to be held in Brazil. The fight put face to face two major Brazilian MMA names that are close to a title fight in the middleweight division. Friend of Belfort and a fan of Jacare, the lightweight UFC fighter, Gilbert Burns, believes it will be a style duel with Belfort taking advantage standing and Jacare in grappling. “This fight will be a high level match. Vitor has very fast hands and very sharp Boxing.

At the beginning of the fight, Vitor has a major advantage because of his speed and explosion. But in the other side we have a very tough guy. Jacare was the a guy that I always mirrored myself to, he was one of my idols since I started to compete in Jiu-Jitsu. Always wanted to be the lightweight version of Jacare in Jiu-Jitsu and also in MMA. He has a very offensive ground game and seeks the finish in his fights, so do I in my fights” Durinho said.

Currently, Durinho is no longer Vitor Belfort’s Jiu-Jitsu coach – who left the Blackzilians last year – but created a great friendship with the “Phenom”, who began practicing MMA. world champion of Jiu-Jitsu, Durinho grew up watching Ronaldo Jacare in BJJ tournaments and became a big fan. So he would not want this fight to happen. “I would rather see Vitor fighting Anderson Silva … But the UFC eventually made this fight, which will be a confrontation between a close friend and a guy I’m a fan of. Vitor is a great friend, I started training MMA with him. We have a great relationship. We are no longer training together. I stayed on with the Blackzilians and he is no longer part of the team, but it’s a great friend. I learned a lot of things with him. It’s a very complicated situation, they are two guys that I really like. This fight will be so hard to watch, but I see an advantage for Vitor to fight on his feet, because he has a lot of speed in his hands, great distance and a lot of experience. Jacare is a monster in grappling, very good takedowns, he’s finisher, can take punishment, has a lot of gas in the tank and is very strong. It is a very dangerous fight for both. Vitor takes advantage on stands and speed and Jacare takes advantage in grappling and gas tank.” concluded Durinho.